In July 2022 NEC published the new NEC4 secondary option X29 on climate change (O’Connor, 2022), which enables clients to set specific climate-change targets in a new ‘Performance Table’. However, the new table can be used to set targets for anything, so another way of using X29 is to facilitate procurement based on whole-life cost rather than just capital cost. This will also help to reduce climate impacts. This article develops an earlier article on using option X17 on performance damages to incentivise lower whole-life cost (Patterson and Trebes, 2015a.) NEC users can of course use X21 for whole-life cost. However, X29 is arguably better as it enables clients to include both positive and negative incentives.

The procurement route that directly encourages bidders to select the option with the lowest whole-life cost is the one that makes the contractor responsible for designing, building and operating the asset (Patterson and Trebes, 2013). This is now possible with the NEC4 Design, Build and Operate Contract (DBO). If the client does not have the cash for the capital expenditure, it can choose to let a contract for design, build, finance and operation using project finance, which is often the route used in public−private partnership arrangements (Patterson and Trebes, 2015b).

However, the client may have good reasons to want to operate the asset itself. In that case, if the client is requiring the contractor to design and build the asset, it may be appropriate to incentivise the contractor to deliver the solution to its requirements with the lowest net present cost. In the UK this is encouraged by the Public Contracts Regulations and internationally by funding institutions. This article explains how a client can procure for lowest net present cost using the NEC4 Engineering and Construction Contract (ECC) using secondary option X29.

One way of selecting the best solution based on net present cost is through extensive design development and ‘optioneering’. This might be prior to defining the client’s detailed requirements in a construction contract, or it could be during the first stage of an ‘early contractor involvement’ (ECI) procurement route, working with the contractor in a stage one to arrive at a solution for stage two for detailed design and construction. In NEC4 ECC one can set up ECI using option X22. The agreement of the X29 performance table (see below) could be part of the work in ECI stage one.

Construction contracts are mainly set up to cover the process of designing and delivering an asset. As such they tend to focus on the capital expenditure required to deliver the asset. If the procurement is to incentivise lowest net present cost, it will have to build in the operational expenditure of the asset.

As an example, consider a simple water transfer scheme in which the client’s requirement is to transfer a stated flow rate of water from a river intake up to a storage reservoir. Power costs for pumping will contribute significantly to the operational expenditure and will be dependent on the diameter and number of pipelines used and the efficiency of the pumps installed. In principle, smaller pipes will have a smaller capital expenditure, but require more pumping capacity (more capital expenditure) and higher pumping costs (operational expenditure). Logically the contractor should be given as much flexibility as possible to choose its design solution to miminise the net present cost to the client.

For significant elements of operational expenditure that can be directly tested and proven, a bidder can be required to state the performance the asset will achieve. ECC option X29 could be used to allow the bidder to offer a guaranteed level of performance, for example, the power consumption, in the performance table.

If X29 was not included and the performance requirement instead was stated in the scope (or, more likely, the scope provided by the contractor for its design) and the performance did not meet the requirement, then the contractor could offer a commercial deal to the client to accept the defect, as it can for any defect under clause 45. The benefit of using X29 is that the parties can pre-agree the ‘cost’ of particular defects and so properly incentivise the contractor to minimise the operational expenditure of the finished asset. More importantly for the financial element of bid evaluation, the client can select the solution with the lowest whole-life cost including for the guaranteed performance levels.

On the positive side the client can, in the performance table, also give the contractor a positive incentive to beat the target that was set. Such an incentive should genuinely encourage the contractor to design for reduced whole-life cost. Option X29 can also be used to act in the same way as the (negative only) performance damages that can be built into the contracts of the Institution of Chemical Engineers (IChemE), sometimes favoured for process contracts; the schedule of guarantees included in the Fidic Yellow Book; and the performance guarantees available in the Fidic Silver Book.

In the pipeline and pumping station example, the bid document would include the performance table in contract data part two and require the bidder to state and guarantee the performance level, in this case the specific power consumption of the system in kWh/m3 of water delivered to the storage reservoir. The bid evaluation mechanism would include: the net present cost of the energy consumed over the life of the asset based on the specific power consumption offered by the bidder; a notional average requirement of the daily volume of water at the storage reservoir; the cost to the client per kWh/m3 of power; the notional design life of the system; and a stated discount factor.

The mechanism therefore incentivises the contractor to make sure its design gives the client an asset with a net present cost for power (in this example) no worse than has been offered. The principle could be made to apply separately to performance levels for different things affecting the operational expenditure of the asset that could be guaranteed by the bidder and tested.

Other elements of the contractor’s design might affect the operational expenditure but not be easily directly tested and proven. In the example above these might include: the level of automation in the pumping station and so the amount of manning required; the plant and material used for the pipeline (and so design life of plant and material); the replacement cost of mechanical and electrical items during the lifetime of the asset; and annual planned preventative maintenance costs.

Each of the elements could have limits set in the scope and be modelled based on the solution offered by the bidder. If the details of how these are to be modelled can be set out in the instructions to bidders and so the net present cost of these elements can be calculated, the mechanisms could be combined to ensure the bid with the lowest overall forecast net present cost does best in the financial element of the bid evaluation.

Having chosen the bidder on that basis, the instructions to bidders would have to make it clear that the relevant elements of the bidder’s solution must be included in ‘Scope provided by the Contractor for its design’. Then the contractor is required to build the low net present cost solution that it offered as a bidder.

For other elements of the works where the contractor does not have flexibility in its design sufficient to affect the operational expenditure significantly, there is no need to make specific provision over and above making the client’s requirements and constraints clear in the scope.

Under ECC Option C (target contract with activity schedule) it is in the client’s interest to work with the contractor through the project manager to minimise construction costs and so increase the cost saving below the target, which is shared between contractor and client as defined in the share profile. The contract does this by comparing the actual defined cost plus fee with the final total of the prices (the target). However, assuming the performance damages correctly reflect the additional net present cost of the asset to the client caused by a failure meet the performance levels, the client will have no direct incentive to help the contractor deliver or improve upon the tendered performance level of the asset. This may not be a significant problem. 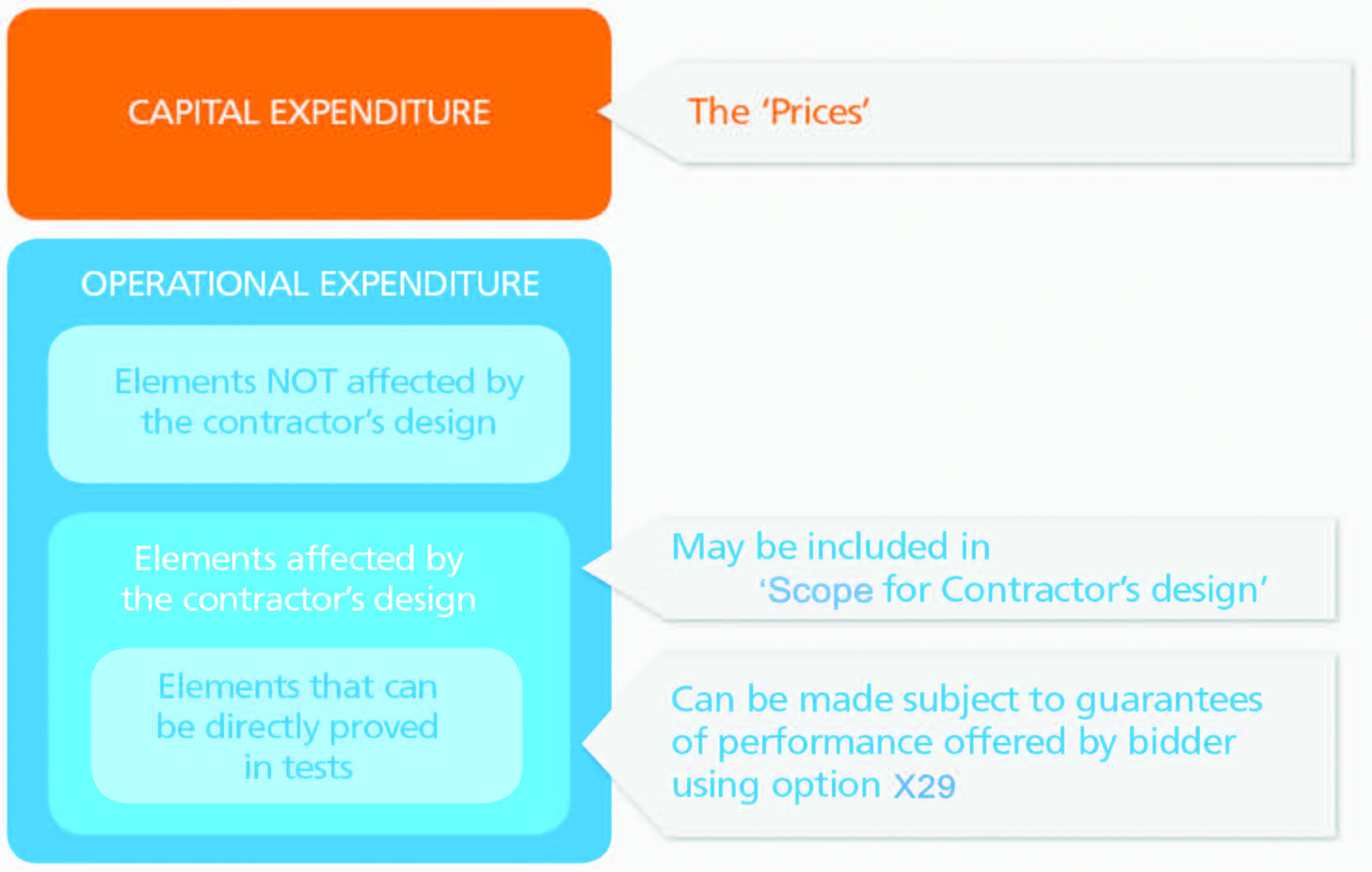 It may be that X29 will also be used to directly incentivise the contractor to use less fossil carbon – but that is another story.

An interview with Ryan, Assistant Quantity Surveyor for Trebes

Ryan, Assistant Quantity Surveyor at Trebes talked about his experience of taking the Project Manager Accreditation course and the multiple-choice question assessment.

Why and how original designers should stay involved in NEC4 ECC

There is a risk that an NEC4 ECC project manager does not have sufficient design knowledge to accept the contractor’s design and change the scope appropriately.