The UK government has used NEC to procure a £100 million state-of-the-art support facility for the Royal Air Force’s (RAF) new fleet of nine Boeing Poseidon MRA1 maritime patrol aircraft. These submarine-hunting aircraft are entering service between 2020 and 2021, providing enhanced capability over that previously provided by the Nimrod fleet.

Defence Equipment and Support (DE&S), part of the government’s Ministry of Defence, let the design and construction of the 33,000 m2 facility to Boeing Defence UK and its sub-contracted construction partner Robertson Construction in February 2018. The contractors worked under back-to-back NEC3 Engineering and Construction Contracts (ECC) Option C (target contract with activity schedule). DE&S was project manager, supported by WYG (now part of Tetra Tech), and over 20 local subcontracts were let by Robertson under the NEC3 Engineering and Construction Subcontract (ECS).

Following a 12-month pre-construction period, work started on site in April 2018 and the completed building was handed over on time and budget for fitting out by DE&S in July 2020. An adjacent ground support equipment hangar was completed in September 2020. 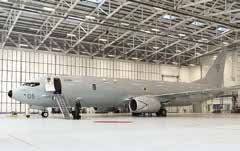 DE&S project manager Michelle Sanders said at the handover, ‘This new strategic facility at RAF Lossiemouth is a great example of successful delivery through collaborative working. DE&S, Boeing Defence UK and Robertson have worked closely since the project began in early 2018 and here we are, just over two years later, taking delivery of this splendid new building.’

She says NEC was adopted as it was Ministry of Defence’s preferred and well-tested method of contracting for projects of this type. ‘It was important for the contracts to provide enough flexibility to deal with changes to the scope and to manage the unexpected. The pricing mechanism of NEC3 ECC Option C was identified as an appropriate mechanism for the type of project as it offered a level of control as well as flexibility.’

Sanders says the NEC contracts provided a high level of transparency and supported a collaborative way of working between the parties. ‘The mechanisms within the contracts, such as early warnings and compensation events, allowed the parties to prepare for and deal with the unexpected in an efficient manner. The way the contracts were set up also prioritised progress of the project and avoided delays’.

She says the NEC early warning mechanism was a particular benefit to the project, allowing the parties to share potential issues and work collaboratively to avoid and/or mitigate the risks throughout the works. ‘The compensation event mechanism also supported continuous progress of the project. By having a clearly defined scope and criteria for compensation events, all parties were able to understand what works were in or out of the scope or criteria of each compensation event.’

She adds that NEC supported the provision of information required for budgeting, such as forecasts to completion, which in turn gave the client greater control over the project.

More than 250 delegates attended the NEC Asia Pacific Conference in November 2022, the first in-person event since 2019.

An interview with Samantha Evison, Senior Quantity Surveyor about the NEC accreditation course

Samantha Evison, a Senior Quantity Surveyor at Costain talked about her experience of taking the Project Manager Accreditation course and the multiple-choice question assessment.