The Hong Kong government has successfully delivered an NEC-procured community project in Sha Tin, New Territories as part of a series of HK$100 million (£10 million) ‘signature project schemes’ (SPS) in the special administrative region’s 18 districts. The Sha Tin scheme, which received additional funding from the Hong Kong Jockey Club Charities Trust, was highly commended for the 2018 NEC Project of the Year award.

The scheme involved revitalising the town centre promenade along the Shing Mun River and creating a new community space over Tai Wai Nullah at the upstream end of the river. The government’s Civil Engineering and Development Department (CEDD) tasked Concentric Construction Ltd to construct the works under an NEC3 Engineering and Construction Contract Option D (target contract with bill of quantities) in May 2016.

CEDD’s north development office was the NEC project manager while Black & Veatch Hong Kong Limited, also the designer for the project, acted as NEC supervisor. The HK$132 million (£13 million) contract is set for completion on budget and within programme in December 2018.

According to the NEC awards judges, ‘There was a very strong team identity created on the Sha Tin project, with common goals identified. There was good use of NEC thinking from the tender stage onwards and use of regular collaboration workshops. Collaborative risk and opportunity management helped bring the project to a successful conclusion, including dealing with some challenging stakeholder management.’

Attending the NEC awards ceremony in London, deputy project manager of CEDD’s north development office Law Man-tim said, ‘The building of mutual trust and co-operation among members of the NEC project team in the early stage of the construction and the continuous efforts in maintaining such relationship was crucial to the successful implementation of the project.

‘Through arranging regular meetings, workshops and activities, the communication and mutual trust among team members are effectively enhanced. The mechanism of early warnings set out in NEC can also offer timely and effective solutions to the risks and challenges faced by the project, which facilitated its on-time and cost-effective delivery.’ 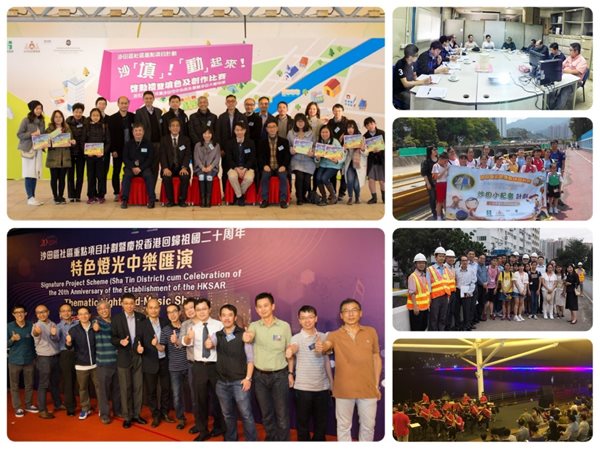 CEDD organised and encouraged various NEC workshops throughout development of the project. During pre-tender stage, a mock tendering exercise was arranged for all potential tenderers to emphasise NEC characteristics and procedures and aim for smoother contract commencement. During construction, the contractor, project manager and supervisor pro-actively participated in NEC training workshops arranged by CEDD as well as in other NEC seminars and in-house workshops for continuously enriching the knowledge and application of NEC.

Tony Lau, director of projects of Black & Veatch, says the project team faced numerous challenges and risks. ‘A substantial amount of public involvement and consultation was necessary throughout the development of the project, and swift decisions and adjustments to the works for addressing public concerns were crucial. Also, with the works areas being located in such close proximity to the community, public expectations and needs had a significant bearing on the construction sequence and methods.’

Apart from the scope of the projects, covering a wide range of architectural, civil, electrical and mechanical works, he says the operational need and preference of future management and maintenance authorities also imposed complexity to the design and construction of the works. There was also an absolute ceiling on the funding, which imposed limitations on scale, design and construction methods. ‘All these challenges were overcome through the strong spirit of mutual trust and cooperation engendered by NEC within the project team.’

Lau says public consultation required throughout the development of the project resulted in substantial changes to some of the NEC works information. ‘Working within a joint office enabled the team to swiftly share available information and knowledge, and then effectively review and update the designs and construction methods. From discussion with stakeholders, gathering of site information, detailed design to sub-contracting of works, team communication and willingness to cooperate were crucial in obtaining the final approval on the revised design for subsequent construction.’

He says both the contractor and the project manager competently and collaboratively utilised the NEC mechanisms of early warning and risk reduction to manage the risks together in good faith. ‘For example, there was a potentially significant delay to the bridge lighting caused by power supply problems and site constraints, but this was overcome in time for the bridges to be part of a thematic light and music show to celebrate the twentieth anniversary of the establishment of the Hong Kong special administrative region in July 2017.’

Working on the existing 1.6 m wide footbridges with high pedestrian traffic was also a major challenge. Following the team’s effort to resolve and address public objections and concerns about a temporary pedestrian diversion scheme, no complaints were received during the work.

England’s Environment Agency has used NEC to protect over 4,000 homes and businesses in the north-eastern city of Lincoln from 1-in-100-year flooding by the River Witham.

NEC has been used to deliver a £1.1 billion extension to the Northern line underground railway in London, UK.